The World-Heritage and the Culture-Shock

Subject:  ZDF mediathek: I'll treat you to it

To ZDF Sunday-Service of the EKD

Protestant Parish A. u. H. B. Bregenz 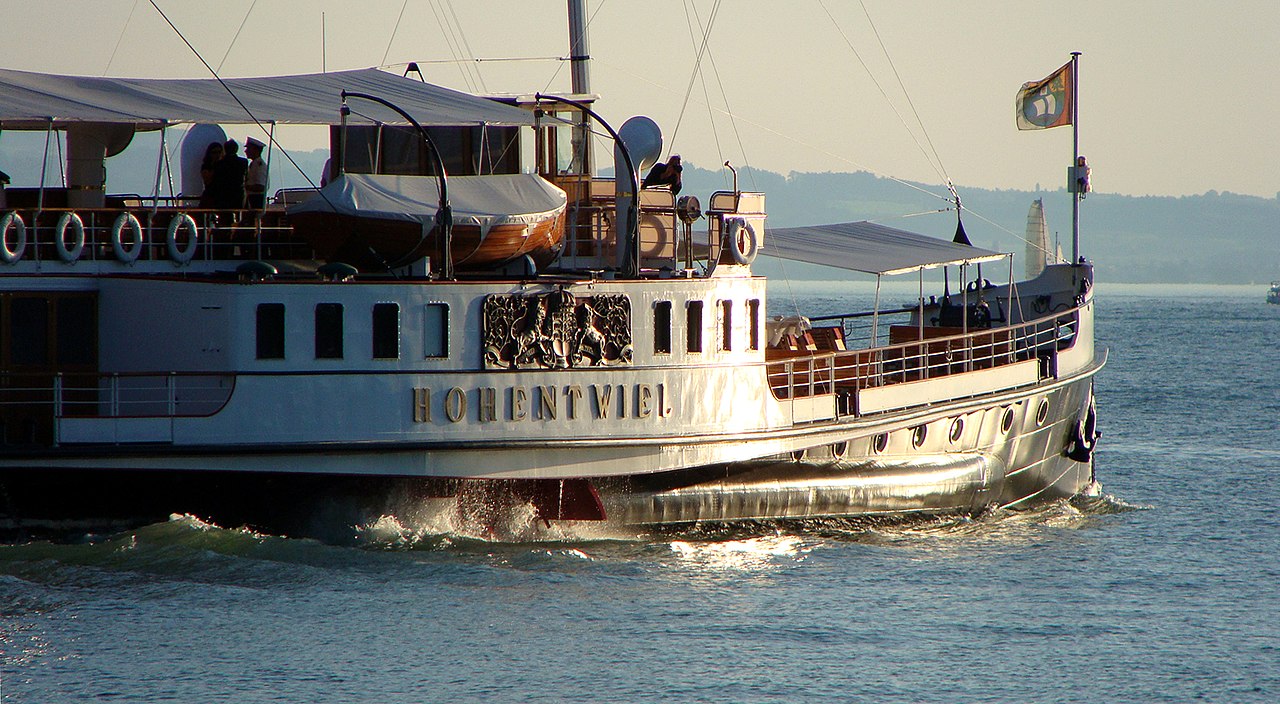 Please let the German-language document be translated into many languages and be handed over to the right persons.

The HOHENWIEL and send out Your Spirit and Everything will be new!

I grant you that!

Because of your slogan above, which made me curious, I watched the video or rather the recording of today's Sunday-service on the Internet and was disappointed, as always, that the actual motto was once again:

"I treat myself to that!"

Despite this, I followed your talk, as well as the whole service, which took place well on the old but restored steamship, the HOHENWIEL, on Lake Constance.

The ship was well decorated even in the engine room with brass or gold leaf and with many life rings  decorating the ship all around.

Due to this public appearance via TV and Internet, every normal Christian person should have absolutely expected that in your lecture, which was close to people, at least once in comparison the rubber dinghies of the refugees coming not only across Lake Constance but across the Mediterranean Sea would have been mentioned, which did not happen and again fitted to "I treat myself to that" and not as indicated at the beginning, "I grant you that" would have belonged, which is sad enough.

You also mentioned, Pastor Stoffers, that the Lord God is generous, which is obviously true and which many people could confirm, but despite this generosity, people have literally "drowned" in the Mediterranean and were not even in adulthood, but drowned and are drowning as babies, as toddlers or as adolescents in the vast sea, helpless and left alone!

Is there really at least one other Creator and which Creator of the tribes embodies the truth and right of all Creation?

It is the One who has indeed sent his Spirit and this Spirit makes all things new!

For you and your kind, the best is just good enough, for after all, you and others must be allowed to take time out so that you can continue to stand firm in your faith and thereby also give something to others.

Unfortunately, your "I'll treat myself to that" is of no use to the dead from the Mediterranean if you and others cannot draw the right conclusions from the "sent Spirit", which was also the basis in writing in my various homepages, among other things.

So then in the end it will be possible to change sides respectively the Creators, because for the dark-skinned people the worst is just bad enough, or is it not?

The opportunity to listen to the Spirit of the Lord and follow through, in that these two or even three sides will join or unite, still exists at the end of time during the Revelation of John, which you and others should not oversleep!

Are you and others really worth so much that the Creator has so generously provided for all, but some of His best have to bear very, very heavy burdens?

"Allowing oneself time off" is becoming more and more fashionable, because after all, one must be allowed to recover from one's children and especially from one's youngsters, whom one can hand over to some people at the nursery or kindergarten already at the age of about 3 years, in order to be able to realise oneself as a mother, as a rule, through professional life, also with the side effect that the children learn in good time to find their way in society and in life by learning early on to use their elbows in the group to fight for a place.

However, the fact that preferably a small child and a growing child needs its mother around it every day is denied and no longer granted to the children and so these children are more or less at the mercy of many injustices of the protectees every day, what can be run like a common thread through the whole life by certain events and the child or person can become difficult as a result.

If mothers and fathers had taken over the upbringing of their small children or their child themselves and guarded them themselves, they would generally not need to take time off later to recover from the stresses and strains of the children and young people, which, by the way, an African woman knows perfectly well and would never voluntarily hand over her toddler or child to protectees!

Thus, one no longer begrudges the other anything. The begrudging behaviour or the feeling of being inferior for the reasons mentioned above blows up and can then run through a person's whole life.

If someone then comes into an advantage or privilege, there is always the danger of hatred and envy towards the favoured person even among siblings, which will almost exclusively be due to a lack of care or a lack of love on the part of the person concerned.

To return * to the "drowned" people and the steamship HOHENTWIEL with the life rings, you and others should know that no one, no human being and especially no African is so worthless, even if many of these drowned children and adults seem to have died anonymously, than that Creation has forgotten or overlooked these people.

The complete opposite will be the case, because especially there in the Mediterranean, but also for example in Lake Constance or just where there are lakes and seas all over the world, those "UFO stars" will fall from the sky that have been so generously "aborted" here, and those will not be a few!

These "aborted creatures" were not "granted" life because the mothers or parents wanted to realise themselves or still acquire a better place in society, which would have been much more difficult or impossible with a child.

But abortions are also forced by a state, for example China, and just like life, Creation is in danger of toppling over if you and others cannot recognise and understand the signs of the times and the "sent Spirit" of a few people, preferably my person!

My person now expects you and every informed reader to ensure, among other things, that preferably all luxury liners of the world's oceans will take in the threatened people from the danger areas in a caring manner and that these people, guided together for a transitional period, will relocate to independent villages newly built by the refugees.

Australia, Canada, New Zealand or Russia offer enough space for the people, with the costs to be borne by the global community!

Furthermore, it is expected that the arrivals of the countless "UFO stars", which should normally land on the bottom of the sea or a lake and should come to rest, will not be made public via the media, but that this information will be delivered by secretly means and it is expected that no panic will arise, since these arrivals will probably also become important for the stability of the Earth.

This is the beginning of the end for a possible new beginning and explains much and everything, such as a burial at sea, and that is granted to all of us!!

HP: The whole matter is unfortunately highly complicated but solvable and always concerns the hereafter and everything that goes with it at the same time!

This letter will also have to be published in one of my various homepages, so that an additional security of the information flow is guaranteed.